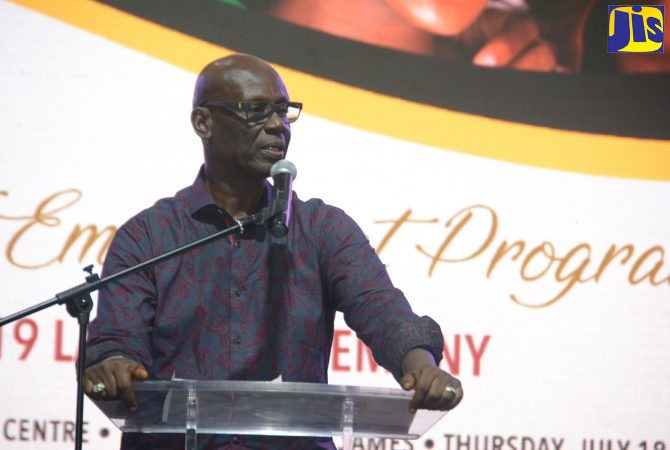 The Minister was speaking at the 2019 launch of YSEP at the Montego Bay Convention Centre in Montego Bay, St. James, on July 18.

The latest quarterly survey of jobs, published by the Statistical Institute of Jamaica (STATIN), noted that the unemployment rate was reduced to a record low of 7.8 per cent up to April 2019.

“We are taking this programme seriously. STATIN announced a couple days ago that the unemployment rate has fallen to the lowest ever in the history of the country and many of you can be counted and were counted in that figure,” Mr. McKenzie said.

“Again, you (YSEP participants) are going to be contributing one year more to the decline in the unemployment rate in this country,” he added.

YSEP has resulted in over 300 participants gaining full-time employment since the programme started in 2017.

In the meantime, Mr. McKenzie announced that another 200 participants from this year’s programme will be retained by the municipal corporations, and they will be trained and certified by the HEART Trust/NTA.

“Last year, we took a decision that those who were not in school or those who were leaving school who showed the potential for work, discipline and demonstrated a certain level of understanding of the programme, that we retain some 200 of them, who are now working full-time within the municipalities across the country. We intend this year to do the same. Another 200 of you will be employed,” he said.

“We are going to put you through a certification programme, through the HEART Trust/NTA, to get you certified in a way that you will have the requisite training and documentation for employment,” the Minister pointed out.

Under the YSEP, young people are engaged at municipal corporations across the island to undertake data collection and support administrative services in order to improve service delivery and ensure greater levels of efficiency.

Individuals will be employed for six weeks, earning $8,500 weekly, with $9,500 per week for team leaders.